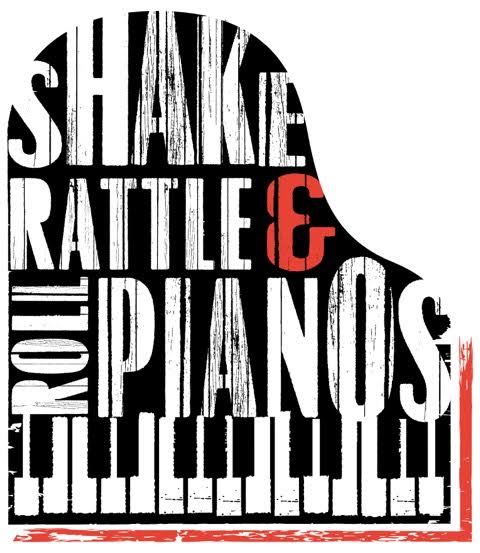 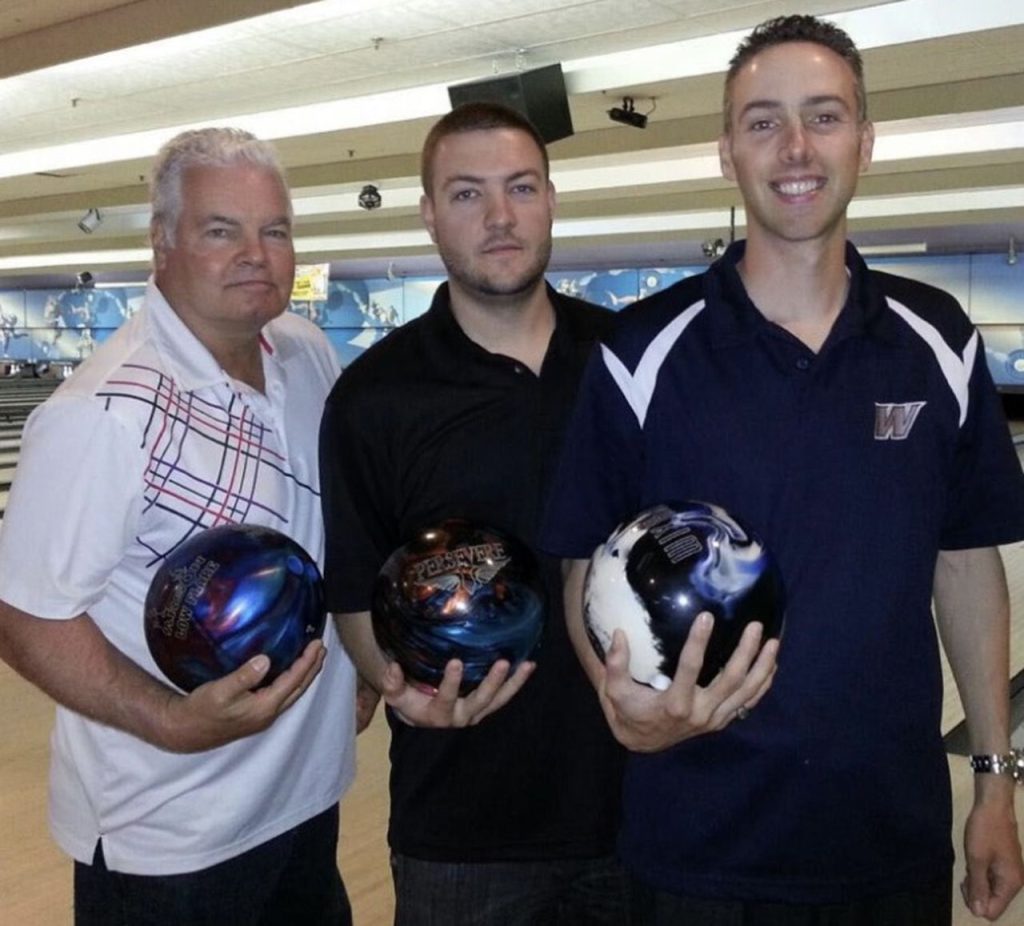 The Top 24 finals of Jim Elliott’s 47th New Year Singles Classic on Saturday at Rab’s Country Lanes will be a family affair for the McAuliffe clan.

Three McAuliffe family members, Tim Sr. and his sons, Tim Jr. and Sean, cracked the Top 24 list as two weekends of qualifying came to a close Sunday at Country.

But both Sean, 35, and dad Tim Sr., 69, the former proprietor of the now defunct Victory Lanes, didn’t want Tim Jr. to have all the fun by himself and qualified 17th and 18th, respectively, checking in with series of 727 and 724.

“It’s so awesome,” said Tim Jr. about competing in the same final field with his father and younger brother. He said it’s the second time it has happened. “Sean called me with the good news (Sunday) night. I’m glad I have a first-round bye so I can avoid my dad until the later rounds. He’s money.”

Sean has been to the finals of this event numerous times, but has yet to win it all. He’s happy, however, to be competing with his dad and brother this time out.

“It’s an honor to represent our bowling family in any tournament,” said Sean. “I’ve bowled my brother Tim a bunch of times — which I have the better record, I might I add — but never my dad 1 on 1 in a tournament. They have both challenged me to always get better in any sport growing up and it will be all business if we do happen to bowl one another but emotions will be high before and after. It would be a dream to see one of them in the final match.”

Proud wife and mom Laurie McAuliffe, who works at Country, will be watching the event with great interest and some angst.

“I think she will be rooting for me. I’m her favorite,” said Tim Jr. with a laugh. “I think she has a Team McAuliffe shirt (from past events) so she will be pulling for all of us.”

Mike Galeotti (786) qualified in the second spot with a 786, while unprecedented six-time NYSC champ George Cretella (780) finished tied for third with Steve Soss, who won this event in 2020.

“George is like Tom Brady (with all those titles,” said Tim Jr. “And if I win this year I’ll be like Patrick Mahomes, chasing George’s record.”

In all, the top eight qualifiers receive first-round byes of the five-game, head-to-head match-play finals format.

Other powerhouses in the scratch finals are past champs Dan Dunleavy, Don Pendleton and Joe Lampariello and Joe Gentile, Joe LaBargo Jr. and Thomas Hollywood Jr.

Note: all averages must be verified

Tired of sitting on the couch watching the game?

Not interested in the big game and looking for something else to do? 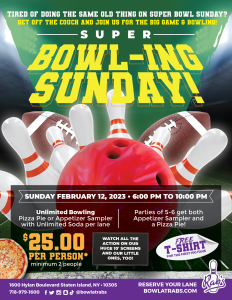 Join us for Super Bowl-ing on Super Bowl Sunday, February 12, 2023 for an evening of bowling fun and football!

The fun starts at 6:00 PM, where you can enjoy unlimited bowling during the game for just $25 per person*!  Not only will you get to bowl ’til you drop, you’ll also have access to some great food from Rab’s Kitchen throughout the game.  With a minimum of 2 bowlers per lane, your party of up to 4 people will receive a fresh pizza pie or an appetizer sampler filled with all your favorite bites and unlimited soda.  Your party of 5-6 people will enjoy both a pizza pie and an appetizer sampler.

Rab’s is the perfect place to watch the big game.  With multiple TVs throughout the center, of all sizes, you won’t miss a single play.  Whether you’re a hardcore fan or just enjoy the social atmosphere, Super Bowl-ing Sunday is right for you.

Don’t miss out… Come and cheer on your team (or just your numbers), bowl, eat, and drink…  Click here for details and to reserve your spot!

To The Nines Live in Rab’s High Roller’s Lounge! 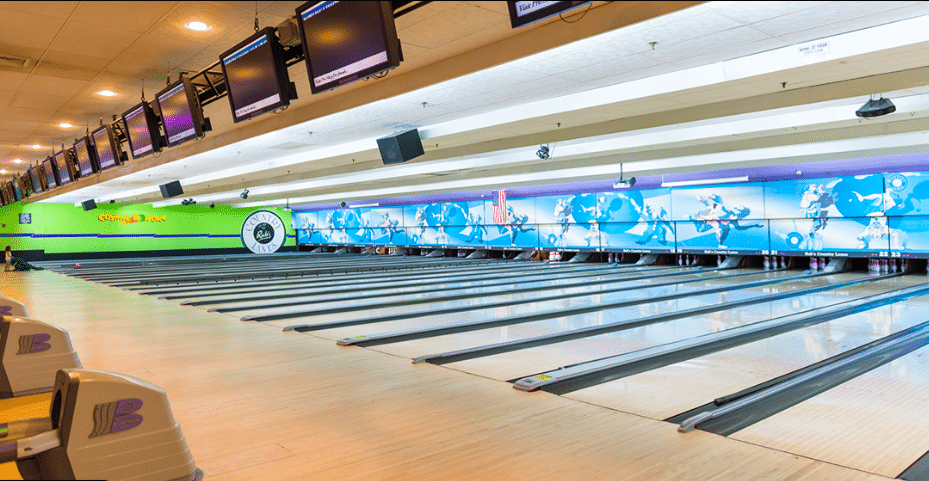 Looking to get out of the house this Winter Break?  Look no further… Rab’s Country Lanes is the perfect place to spend a winter break afternoon with friends and family.  Rab’s, Staten Island’s #1 Destination for Fun, is known for its lively atmosphere and wide range of entertainment options.

As soon as you step inside Rab’s, you’ll be greeted by the sound of pins crashing and the sweet smell of freshly-made pizza, hand-crafted burgers, and great snacks to enjoy.  The lanes are always bustling with activity, and there’s a sense of friendly competition in the air.  Whether you’re a seasoned bowler or a beginner, you’ll have a great time trying to knock down those pins!

Reason # 1 why bowling is such a great activity during winter break is that it’s an indoor activity.  Which makes it perfect for those cold, wet, and snowy days when you don’t want to venture outside. 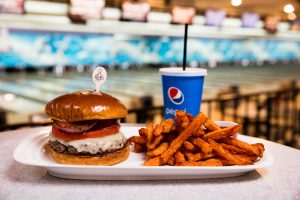 And when you need a break from all the action, you can head over to Rab’s Kitchen for a burger, slice of pizza, our signature wings, or a sweet snack.  Work on those cravings and check out Rab’s Kitchen Menu before your visit.

So if you’re looking for a fun, social activity to enjoy with friends and family over winter break, Rab’s is the perfect place!  Your day with us is sure to provide hours of enjoyment and create lasting memories.   There are available lanes 7 days a week and you can guarantee your lane by reserving it today, right here on bowlatrabs.com!