Rab’s Country Lanes staged its Battle of the Schools Tournament on New Year’s Eve with a new twist, and by all accounts it was a big hit.

The event, the brain child of Terri Hart 15 years ago, usually brings together squads from the current high school teams to face one another.

This year, someone suggested the folks at the Dongan Hills Center should add an Alumni Division.

“This (alumni) event came together really quick,” said Country proprietor Frank Wilkinson. “Michael Ruffe, a St. Peter’s alum, brought up the idea during bowling in the Scratch League a few weeks back. Bowlers came out to bowl today for fun, some who haven’t picked up a bowling ball in quite some time. Some former high school bowling standouts, and some who didn’t bowl for their high school.

“As teams were forming, we got to see many bowlers come together that wouldn’t normally bowl together enjoy themselves representing their alma mater.” 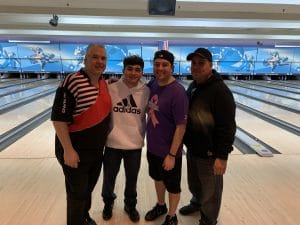 When the smoke had cleared in the Alumni Division, which featured 87 bowlers competing on 18 teams representing 14 high schools, team Tottenville No. 1 emerged victorious. 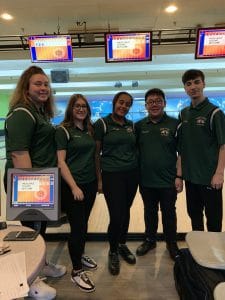 Wilkinson said all monies raised is being donated back to the represented school’s bowling program. A total of $1,500 was awarded with funds matched by the Rab Wilkinson Foundation.