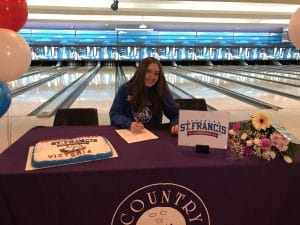 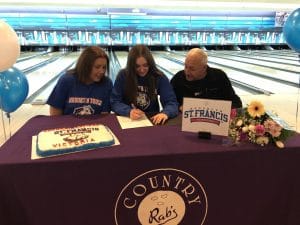 After all, that’s where Hollywood, one of the top junior keglers in the city, virtually grew up, competing in a number of junior leagues and tournaments.

“I chose to do the signing at Country Lanes because they are like family to me,” said the 18-year-old righty. “They are all the reason I am where I am right now, and a big part of the reason I’m going to the college level.”

And she won’t forget what she learned bowling at the Dongan Hills center when she is competing for St. Francis, which boasts a formidable bowling program, one that reached the championship round of the NEC Tournament the last two seasons.

“St. Francis was always the dream. I’ve always wanted to bowl at the college level,” said Hollywood, an Advance All-Star, who will join fellow Island bowler Lexis Ortiz (Tottenville High School) on the Terriers’ roster. Ortiz will be a sophomore in the fall.

The West Brighton resident rolled three 300 games this season and led the Seagulls throughout her high school career. She was second in the city among PSAL girls’ bowlers with a 192.94 average, which included one 300. Her other two perfectos came in junior league action.

“I’ve accomplished a lot since I started bowling at the age of six,” added Hollywood.

Going forward, she hopes to continue to excel on the lanes and in the classroom as an early childhood education major.