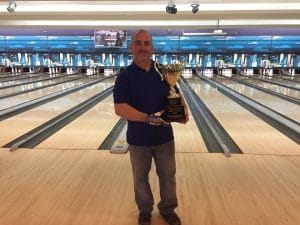 Jeff Scire hasn’t won the Staten Island Singles Classic since 1995, but this year he was more motivated than ever.

After the loss of his father, William Scire, this past September, he dedicated the tournament to him.

“I felt very motivated,” said Scire. “I went to work this morning and the entire time I said to myself ‘this is the first time I made the finals of the tournament since my father passed and I feel like I really have to go out and get it done; I have to dedicate something to him.”

But the road for the No. 2 seeded Scire to the SISC crown was not easy as he went up against John Roam, who he never defeated before Saturday’s 223-184 victory in the championship round at Rab’s Country Lanes.

“John Roam is a very close friend of mine,” said Scire. “When we bowled together in leagues, when we were in our twenties, he had my number. He just beat me over and over. He was just one of those guys I couldn’t beat.

“I dedicate this to my dad. He was the angel on my shoulder and he was here today.”

Roam has been out for over a year due to a finger injury and was pleased with reaching the championship round against his good friend.

“I wasn’t supposed to even bowl ever again,” said Roam. “To come back and just to be in my old bowling alley and make it to the end I’m happy with that. Hats off to Jeff I’ve known him for 25 years and we’ve always battled, but we became friends through that.”

“I made the adjustments it just wasn’t meant to be,” said Roam. “I couldn’t lose to a better guy. He’s averaged 249 this year so nothing to be sorry about losing to him.”