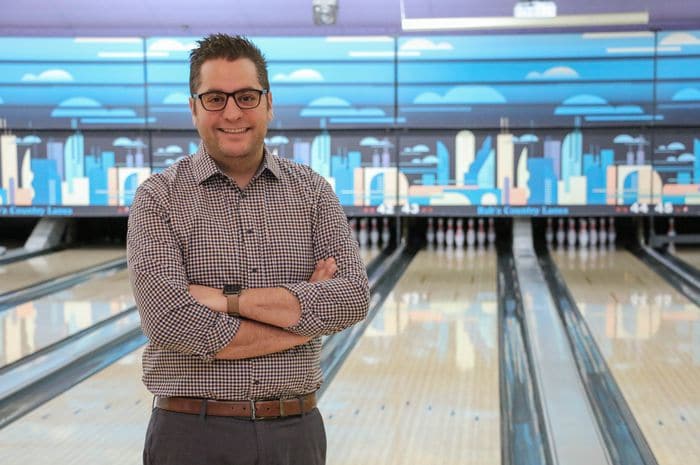 STATEN ISLAND, N.Y. — Bowling has been good to Frank Wilkinson.

In turn, Frank Wilkinson has been a champion for the bowling community.

Bowling has been synonymous with the Wilkinson family for decades since Frank’s father, Rab, was a professional bowler and regarded as one of Staten Island’s all-time best. He owned Rab’s Pro Shop in Grant City and Rab’s Bowling on the Green in New Dorp, before he took over Rab’s Country Lanes in Dongan Hills in 1995.

While most babies wore booties, Frank Wilkinson was probably wearing funky bowling shoes while growing up in the apartment upstairs from the Pro Shop on Lincoln Avenue. Along with his two older brothers — Anthony and Thomas — he learned the business while working in different capacities in the bowling center and running youth tournaments.

As the older brothers decided to pursue other careers, many viewed Frank as the logical candidate to take over the family business down the line.

Except, “down the line” turned out to be a little sooner than expected once Rab was diagnosed with pulmonary fibrosis in 2005, and his mother, Dee, spent more time at home caring for her husband over those next three years until his passing. During this difficult time, Wilkinson decided to put his college and teaching dreams on hold and take a more active role running the day-to-day operations at Rab’s Country Lanes.

“It was difficult because I was a kid coming into the business, and I automatically felt I had to earn respect from the people who already worked here. I was working with the staff, and I was involved, but I wasn’t their boss,” said the 33-year-old. “But over time, you earn that respect. In any business, actions speak louder than words.”

Some of those actions included tapping into the advice from his mentors at the bowling center as well as the United States Bowling Congress (USBC) and the Bowling Proprietors Association of America.

“You learn from your peers. You have to go outside and look for that. Our industry is so tight, and we have some amazing people who are willing to help,” said the Great Kills resident.

Just like learning how to shine on the lanes, Wilkinson — who was a three-time Staten Island Advance All Star for bowling while at New Dorp High School and has rolled 17 perfect games in his career — has excelled as a businessman.

While the amount of bowling centers has dwindled across America over the years, he has kept Rab’s Country Lanes thriving.

“When it comes to entertainment businesses — whether it’s bowling, movies, or restaurants — we’re all in the same boat. We’re fighting for people’s time and dollars,” said Wilkinson. “One of the things my dad instilled and talked about was taking care of those who take care of you. He knew the importance of taking care of the staff that works for us because at the end of the day, our staff is our family and, without them, the wheels don’t turn.”

“He also instilled in us that absentee ownership is a big issue with declining businesses, so you have to be involved,” he added. “You always have to evolve. You have to stay current, and he was always looking at what was next. He looked toward the future in our industry, whether it was technology or the way people act. We prided ourselves on trying to stay current with trends.”

For his accomplishments, Wilkinson is being honored with a Louis R. Miller Leadership Award, which he will receive in the Master Businessperson category. The awards — which are presented by the Staten Island Chamber of Commerce and the Staten Island Advance — honor the memory of Louis R. Miller, a businessman and West Brighton resident who was also a community leader.

The only proof you need to see the family’s success is by visiting the bustling center and hearing the constant crashing of pins by bowlers of all ages and all skill levels. While having a thriving business is enough to make him feel proud, Wilkinson goes a step further with a solid volunteer portfolio.

Rab was a huge supporter of local charities and was cited by several organizations for his generosity. So, it should come as no surprise that his son has continued with the giving spirit by helping others through the Rab Wilkinson Foundation, which awards scholarships to the Island’s youth, and assists a lengthy list of schools, charities, and organizations with their events. Over the last few years, the Rab Wilkinson Foundation has supported the Staten Island Chamber of Commerce’s Young Entrepreneurs Academy program with scholarships, while Wilkinson has also donated his time to act as a mentor for the high school students in the program.

The foundation likely receives its greatest notoriety with its Bowling Against Breast Cancer Bowl-a-thon. Through his leadership, this campaign has raised over $665,000 for Staten Island Breast Health Projects over the past 17 years, including over $50,000 in the last two years alone.

“The core values that (my dad) instilled in us are what made this business. This is why we’re here and why we’re celebrating 25 years this February. If it wasn’t for his vision, we wouldn’t be where we are today,” said Wilkinson.

Whether it’s running the bowling center or helping others through his community involvement, Wilkinson’s leadership abilities are on full display. He said he remembers how his mentors helped him, and that’s why he’s willing to take the time to mentor today’s youth.

Rab’s Country Lanes boasts one of the biggest youth bowling programs in the country. Although the youngsters learn facets of the game, such as picking up spares and adjusting to different lane conditions, they’re also learning countless life skills through Wilkinson, his staff, and coaches. Many of those coaches are high school students who started bowling at the lanes at a young age.

“These kids aren’t just bowling in a program. They get recreation, they get to socialize with other kids their age, and they work with a coach while learning how to throw the ball or just how to be a better kid,” said Wilkinson. “That’s all part of youth sports in general. Without that, we don’t have a future business.”

Recipients of the Louis R. Miller Awards are recognized as effective business leaders, and for their outstanding contributions to the local community. Awards are given out in four categories: Emerging, Established, Master, and Not-For-Profit. The honorees will be recognized during the annual Louis R. Miller Business Leadership Awards Breakfast on Thursday, Feb. 13, at LiGreci’s Staaten, West Brighton. For tickets, visit www.sichamber.com or call the Chamber at 718-727-1900.

Below, Wilkinson shares more about his goals, job, and life:

Past occupation/s and titles: Occupation? Other than a role inside the family business? Non-existent. I’ve had the wonderful opportunity learning all different aspects of our business as a kid, such as cleaning, serving food and drink, sorting and spraying rental shoes, party host, front desk customer service, pin chaser, etc.

The best part of my job: Seeing familiar faces every day while also meeting new people and knowing that our facility provides an outlet for people to get away from everyday life, bringing smiles and joy to those who participate in the fun.

The most difficult part of my job: Who cares? No need to complain about the “difficult” things. Difficult tasks and challenges are things that keep us going. Bring it on!

My life philosophy: Live life to the fullest, have no regrets, and take full advantage of opportunities that come your way!

I am most proud of: The amazing community of family and friends within our bowling center, including our team that makes Rab’s the remarkable place it is.

Something that no one knows about me: People seem to think that I’m fearless, and maybe that’s part of my persona? However, that is SO untrue. Besides the obvious fears, like something awful happening to my loved ones, I have lots of other fears, too, just none that I am not willing to face.

I admire: My parents. They worked too hard for me not to be great.