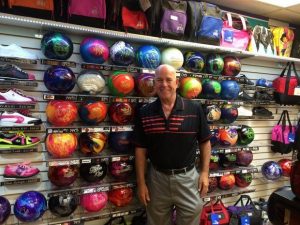 Both “lawn bowling” (games in which a ball is rolled at another) and pin bowling have been played for thousands of years. Archeologist have even found early “bowling pins” in the grave of an Egyptian child buried 5,200 years ago. Early lawn balls where asymmetrical and holeless– very unlike the bowling balls of today!

Most bowling balls were historically made of a very hardwood called Lignum vitae. The first rubber ball was produced in 1905, called the Evertrue. Hard rubber bowling balls quickly became the norm until the introduction of polyester balls in the 1970s. From there, the bowling would start to change at a radical rate.

The following decade in 1980, urethane bowling balls were introduced to the market. Then around 1990, bowling ball would change again with the introduction of new core shapes. It was about this time that reactive urethane coverstocks where also introduced.

In 1984, when the American Bowling Congress (now known as the United States Bowling Congress, or USBC) was founded, they sought to standardize the sport of bowling. Part of this effort included the standardization of bowling equipment, including the bowling ball. The USBC’s regulation and standards have absolutely helped shape the evolution of the bowling ball, and continue to do so today.

As fun as these bowling history facts are, playing the game is much more fun! So check out our upcoming Staten Island events and make your plans to visit our Staten Island bowling today!